From Tarot to Playing cards

Cards in all shapes and forms have always appealed to me; and to rework the Royal Suits from Nine Lives Tarot to create a deck of playing cards is simply too much of an exciting project to miss :)

A while back, I posted a draft version of the Queen of Rods reworked as the Queen of Clubs (which is her matching playing card suit). Her (somewhat patient) wait for me to pick up my tablet and paint brushes has paid off – as I found time to complete her playing card design. To make sure she wouldn’t get bored, I designed the knight and king of clubs to keep her company:

House of Clubs – the Royals 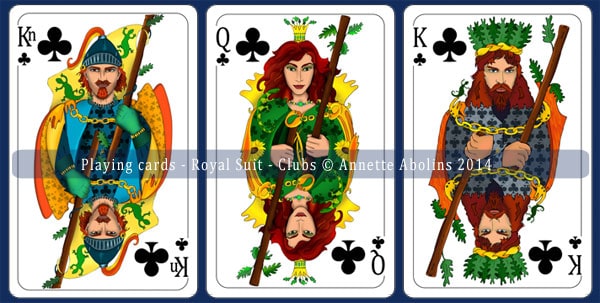 To rework and create a mirror image of each royal character is a bit like laying a puzzle – the divide between the two ‘halves’ weaves in and out, as I aim to seamlessly work them together. It takes time, but it is a lot of fun :)  Starting with the original artwork, I approach each character based on how he/she will translate as a playing card – elements of the suit (in this case Clubs) are added, while the corresponding Tarot suit (Rod) remains an integral part of the design.

Knight as Kn instead of J

I have chosen to abbreviate each knight with Kn – instead of the more common J.
I know, I know … there is that bit about the Knight in shining armour possibly having a little more appeal compared to the Jack (absolutely no offence intended on the able Jack), but on top of the slightly fictive ‘appeal barometer’, I had to take into account that the Knights for this playing card deck are characters in my Tarot deck, and I would honestly find myself in a lot of trouble, if I in any way tampered with their knighthoods … so, in the end – an easy decision :)

In English-speaking countries, most playing cards today use the Jack (abbreviated with “J”). There are many interesting stories lurking in the history of playing cards (quite a few that also resonate with the history of the Tarot), where one is how the Jack came to represent the lower of the court cards in place of the Knight. Initially, the Knight (or Knave as he was also known)  held the fort – proudly abbreviated with “Kn” … then as time marched on and card games evolved, a need arose to distinguish him from the King; primarily to avoid card table confusions, disputes and even a form of cheating, which involved discretely scratching away the ‘n’  to promote a Knight to a King…  and so, along came the Jack…  a willing and able servant of the court, who could be represented by a different letter than the K used for the King  While the journey from Knight to Jack was gradual; the deck using “J” instead of “Kn” published in 1864 by the English card-maker Samuel Hart, is considered to mark the ‘official’ switch.

Still, many non-English speaking countries, such as Scandinavia, abbreviate their Knights (or Knaves or Knekts) with “Kn” – and there are other abbreviations, such as W & V (for Valet), used in other parts of the world. The main thing I guess, is that you and the other players know what each card means, and that you know when you have a full house :)

I’ll be back with another update soon – and Thank you for visiting :)