Since arriving in Europe (sometime in the 1400s), Tarot and playing cards share a long history, where they have existed side-by-side, entwining and exchanging ideas across the centuries. Card games like tarocchi and French tarot are still common today – as is divination using playing cards – known as cartomancy.

In this post I want to share a few comparisons, which may inspire you to look at playing cards in a different light.

Below are two versions of the same 5 Card Reading – one with tarot cards and one with playing cards. The reading looks at what is central in the querent’s life at this point in time, along with indications of influences, strengths and challenges affecting the possible direction he or she may be heading. 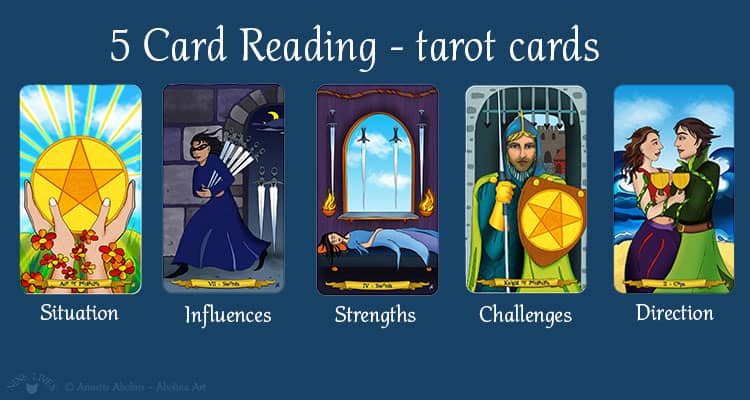 With different schools of thought, cards and personal preference, comes a variety of ways to interpret and read cards (both Tarot and Playing cards). However, the distinction between the two systems can roughly be summarised as follows:

Tarot cards use visual clues, pictures, symbols and colour to portray the meanings behind each card.

Playing cards place more focus on symbols and numbers – closely following the meanings associated with the Minor Arcana in Tarot.

Tarot vs Playing Card – The Situation 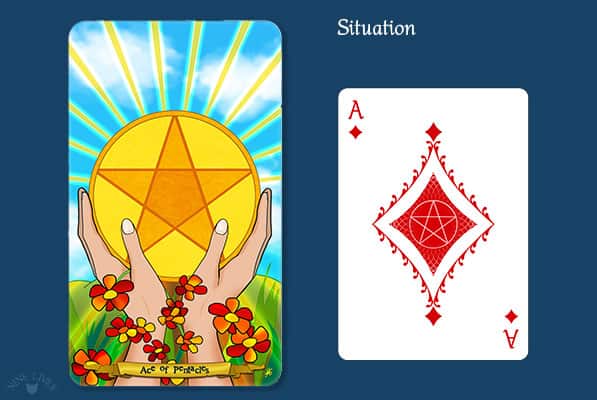 Ace of Pentacles / Ace of Diamonds
New beginnings and a focus on stable home, wealth and good fortune. In this position (the Situation) it points to that an opportunity or new change is central in the querent’s life.

The tarot card depicts a golden pentacle being held up by two hands, symbolising prosperity and new beginnings. Yellow rays radiate from the pentacle lighting up the bright blue sky in the background with optimistic direction. The suit of Pentacles is associated with the element Earth; represented here by the green fields and garland of bright and happy flowers circling the hands.

The playing card shows a large red diamond with a pentacle in its centre. Ace (1) indicates new beginnings and opportunities – and the diamond suit indicates affairs to do with money, home and hearth. 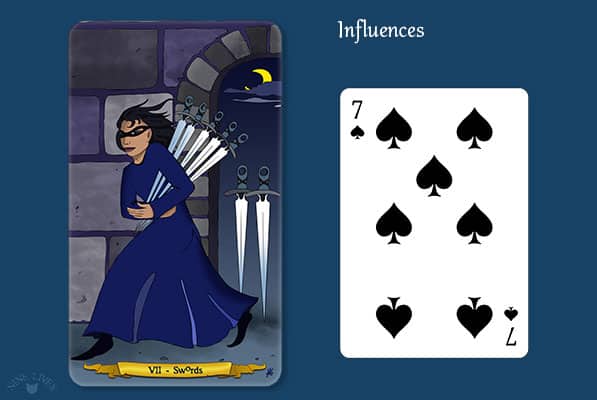 All is not as it appears to be. As an influence card, 7 of Swords / 7 of Spades, brings a word of caution to the querent. Sometimes known as the ‘trickster’ card, this card can often be about our own mind playing tricks on us… where we simply put a lid on intuition and choose to believe what we would most like to be true – or, fail to see that things may not be as bad as we think. In this position the card indicates that something is hovering around the new opportunity, perhaps a temptation, perhaps a concern – to examine and be aware of what this is, will help the querent make an informed decision going forward.

In the dark moonlit night, a masked figure runs through an archway carrying five swords. She wears black pointed slippers so as to not make any noise – and a subtle smile can be seen on her face, indicating that she is confident of not being captured.  The colour scheme is dark indigo and purple, symbolic of the suit which represents the element Air and the realm of the mind.

The playing card shows 7 spades, which correlate with the suit of swords. The number 7 indicates possible loss, along with the importance of analysing a situation and using one’s intuition. 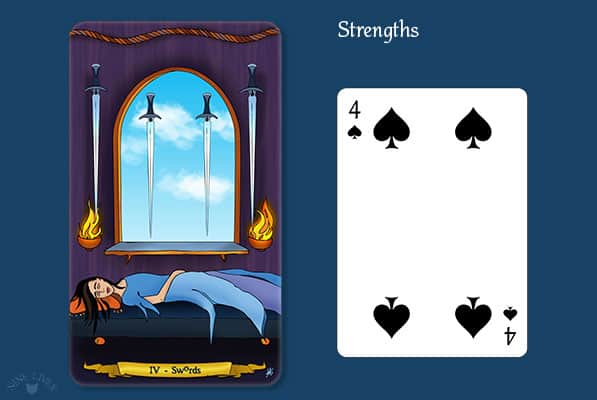 4 of Swords / 4 of Spades in the position of Strengths, shows that taking ‘time out’ to reflect and recharge is an important place to draw strength from. Following on from the previous card, the advice is to withdraw and reflect before jumping to quick conclusions.

A woman is sleeping on a bed beneath an arch window. She appears peaceful and content with her face turned away from the world outside. The two flames on the wall are symbolic of both physical warmth and her recharging mind. Four swords are suspended above her, indicating that no harm will come to her in this place of reflection, solitude and preparation for what lies beyond.

The playing card shows four spades evenly spaced on the card, with the 4 symbolising order and routine. 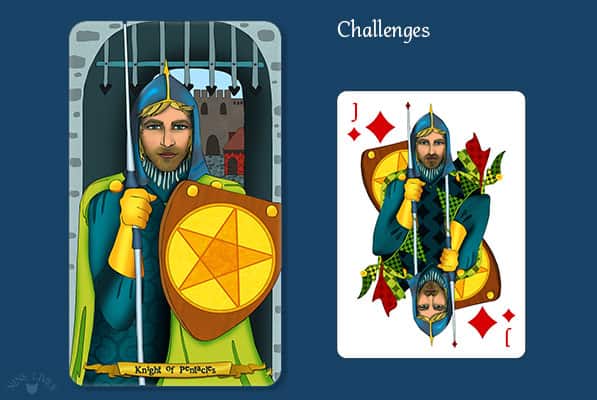 Knight of Pentacles / Jack of Diamonds, in this position the cards speak of the importance of protecting the new opportunity. The challenge may come from within, or from external influences. Recognising that commitment, hard work, reliability and trust are needed to see things through can help the querent rely on his or her own strengths, turn to the right people for advice – and identify a path forward.

A knight stands guard outside the palace wall. While his face is calm and perhaps even friendly, there is no question that he will use his spear and shield to block the way for unauthorised visitors. Shiny armour and castle buildings in the background, suggest that he protects a prosperous domain.

The playing card depicts a two-way jack, clad in shiny armour with a combination of both pentacle and diamond suit symbols.

Tarot vs Playing Card – The Direction 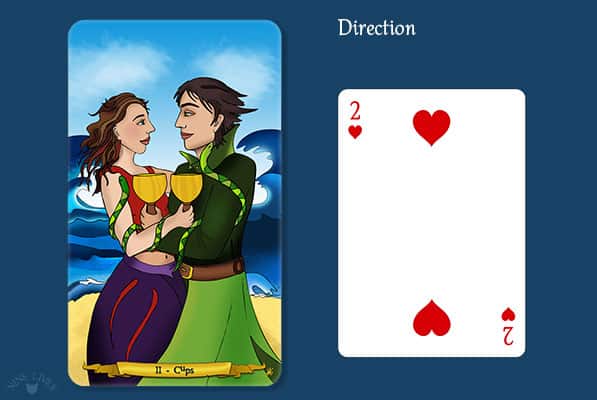 2 of Cups / 2 of Hearts, in this position (being all about the outcome and direction of the present situation), the cards point to a love interest, unity or special relationship playing an important role. Unity and mutual respect represent an integral part of moving forward and may be fundamental for the opportunity on which the reading rests.

A couple embrace on a beach. They radiate unity and respect as they face each other in love. They hold a cup each, with two snakes swirling up their arms. The suit of Cups symbolises emotion and love and is connected to the element Water; emphasised by the ocean waves in the background. Snakes represent wisdom, health and renewal, indicating that their relationship is built on mutual trust and the desire to grow together.

The playing card portrays 2 hearts – where the suit of hearts correlates to the suit of cups, the number 2 symbolises unity, duality, companionship and diplomacy.

I hope you enjoyed this little comparison – and if you want to try out the decks above for either reading or game play, you can find all my decks including specials and sets on this page:

Thanks for visiting and take care
Annette :)