The artwork for Nine Lives Illustrated Playing Cards is completed and the designs are now (most excitedly) in the hands of the printers… I am hoping to have them available on the website within a week or so… so stay tuned :)

My art projects do tend to be quite focussed and ‘head down’ during the finishing stages, which unfortunately means fewer updates & WIPs … To remedy the recent lack of posts, this post is an update and a pre-press-preview of the deck.

I have enjoyed working on this little deck, which combines the symbolism of Tarot and Playing cards. It has allowed me to further explore some of the artwork (Kings, Queens & Knights) from Nine Lives Tarot, while delving deeper into the fascinating history of Playing cards and Tarot.

Royal Artwork … Cards of the 4 Courts

The artwork for the deck began with the court cards from Nine Lives Tarot. Each character has been redrawn and mirrored (or reversed), while dressed to match their corresponding suit. Playing card symbols were introduced to the printed (painted) fabric, which naturally required approval from the royals… The colour scheme follows the emphasis I used on the suits in Nine Lives Tarot: Hearts/Clubs = Red, Clubs/Rods = Yellow, Diamonds/Pentacles = Green, Spades/Swords = Indigo. 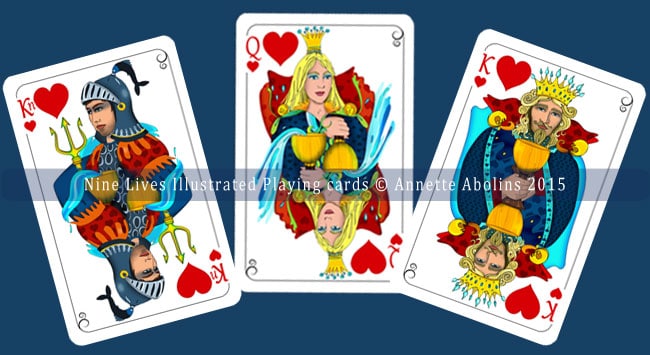 The Knight, Queen & King of Hearts – connected to the suit of Cups 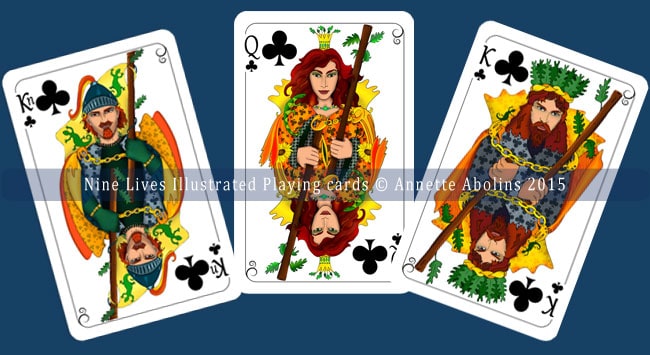 The  Knight, Queen & King of Clubs – connected to the suit of Rods/Wands 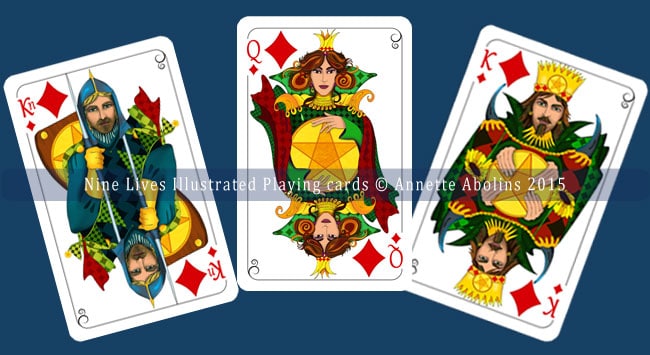 The Knight, Queen & King of Diamonds – connected to the suit of Pentacles 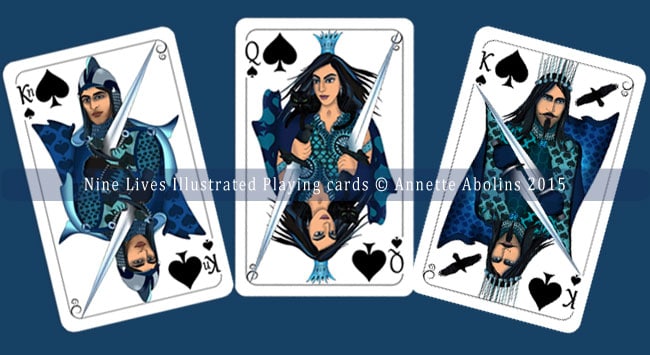 The Knight, Queen & King of Spades – connected to the suit of Swords

Aces, Card symbols and Back of cards

It is a fair assumption that the four playing card symbols are simple and almost generic in nature. One heart is the same as the next one, right? Well, once I started drawing these ever so simple symbols (first in pen, then scanning and enlarging them on the screen), simplicity as I knew it went out the window. I tweaked and redrew these symbols multiple times until I got to the point where I felt the four belonged together; different, yet speaking the same language :).

The combined suit symbols of playing cards and tarot are incorporated in the illustrated Ace cards: 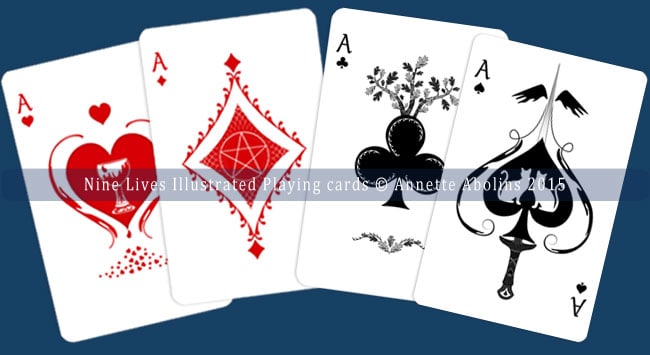 The back of the cards incorporates playing card symbols and a visual reference to the name of the deck :) 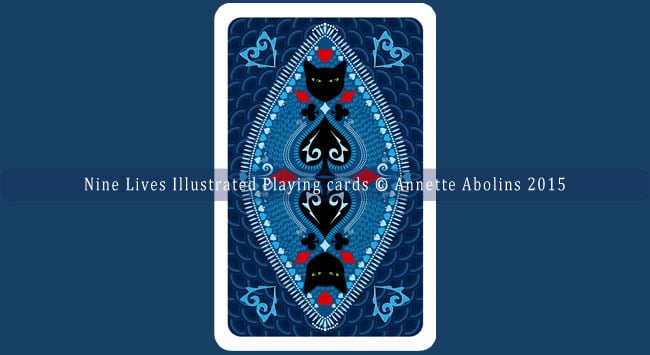 Some interesting things I’ve discovered about playing cards and their symbolism:

The following lines on houseofplayingcards.com describe the world of playing cards better than I could hope to :)

Decks of playing cards are simultaneously simple and complex. They are small, easy to carry, and colorful. They connect with the fact that people love secrets. When playing a game, only you know your hand, so you hold a secret.  The thought that you will beat your opponents appeals to desires of control. The romantic interpretations of the cards have increased the mythology surrounding them. Cards can be used to connect friends, swindle enemies, and amaze strangers.  Cards can be whatever you want them to be.

Thank you for visiting and take care!
Annette :)