The Tarot is persuasive, fascinating and alluring by nature; it calls upon readers to interpret the cards and beckons artists to portray the cards … and so, when inspiration comes knocking, there is little one can do but follow along with pen and paint brush in hand … 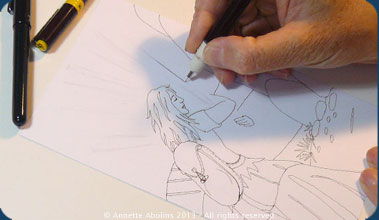 From Idea to Creative Journey

I have long been fascinated by the visual language and symbolic elements of the Tarot, and, as an artist, the inspiration and opportunity to portray each card was simply impossible to resist.

Creating the artwork took three and a half years, including many late night painting sessions stretching well into the morning. Along the way, I delved deeper into the Tarot than I had ever done before; as I interpreted, explored and discovered new things. Being a visual person, drawing and painting the cards taught me more about the meanings than I could learn from books, as I literally lived my way through each meaning as I painted. Artistically, this journey was unlike any I’ve experienced before; leaving me with a sense of humble connectedness, which will no doubt inspire further works. 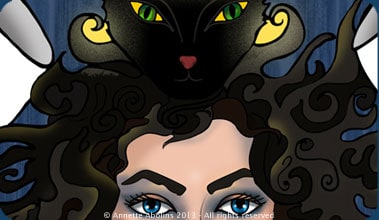 A Path for Painting

Because of my ’50 irons in the fire’ approach to life, I sometimes fear all will fall to ruin if I don’t have a plan … With a vivid imagination and wishful thinking (denial), I can dream of being organised … though neatly labelled and colourfully painted cardboard boxes may end up holding a jumble of anything but what is on the label: 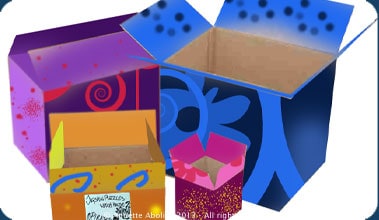 When creating Nine Lives, I tried as much as possible to follow a well-lit and nicely paved path through the deck. Keeping on the path while I was painting, gave me a sense of knowing where I was at; which in a round-about way allowed my inspiration and imagination to flow.

Almost serendipitously, I felt that my attempt to be organised was being rewarded by the universe, as I would often wake up from a dream with the next painting in my head. Naturally, there were deviations from the path, though I thoroughly enjoyed being able to greet the characters as they walked through the door to my imagination. Some, I secretly longed to meet well ahead of their ‘appointment’, others, I looked forward to with a dose of trepidation … all taught me something I did not previously know :)

While my imagination flavours each painting,  there is no doubt that the many conversations I had with the characters as I drew them, inspired the work as well. 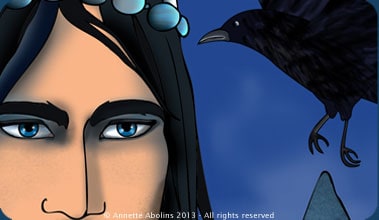 From Artwork to completed Tarot Deck

Sending the artwork off to be printed was both exciting and scary, the wait was gruelling … and then they arrived! Holding my first Nine Lives Tarot deck was memorable to say the least :)  The paintings had officially become part of a cohesive whole; a Tarot deck! Seeing the completed result gave me pause, as I finally saw the wholeness, and how Nine Lives had become its own thing, separate from me :) The thought that these decks would grow wings, leave my hand, and go on to live their own exciting lives, was humbling and exciting indeed.

Initially, I had thought that it would be strange to read with my own deck, I thought I would find it hard to see beyond the individual paintings, which I had been so intimately involved with … I soon realised how wrong I was; Nine Lives has been a joy to read with so far and is teaching me new things every day :)

The style of Nine Lives is bright and colourful, there is an accessible and life-affirming side to the cards (at least I see them that way), there is also thought, depth and detail woven into the artwork. As the characters introduced themselves to me, begging to be included; I could but follow with my pens and brushes … My desire is for Nine Lives to guide and provide joy to everyone who picks up the deck. 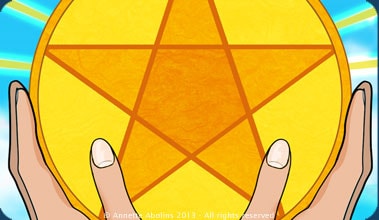 It is almost ironic that I can be ‘little miss have a chat’ about practically everything but my own art (I believe this to be true for many artists). Where pens and paint-brushes previously flowed, I find myself fretting over a few words (don’t start me on titles for paintings…), bending and shaping, deleting and re-writing with a hope of getting the meaning just right; How to convey every thought, inspiration, feeling behind a drawing or painting – in just a few words? How to describe the artwork so it makes sense to everyone? Words, to me, have a sense of being ‘set in stone’ whereas a drawing or painting can be interpreted in many ways.

So, my hope is that you can read between the lines to gain a sense of the journey behind Nine Lives, and in time, form your own connection and idea of what the artwork means to you.

If you have Nine Lives Tarot and would like to share your thoughts, ideas or experiences using the deck, I’d be ever so happy to hear! If you would like to own a deck, there is one waiting for you right now :)

2 thoughts on “About Art and Tarot”