A while back, I posted about  some of the things you can do with a deck of playing cards … and today, I bring you a more ‘hands on’ approach to reading, laying patience, and playing cards. If you are twiddling your thumbs with a new (or old) deck of cards, or if you are thinking about getting a deck  – then the ideas and suggestions in this post should keep you busy for a while :) 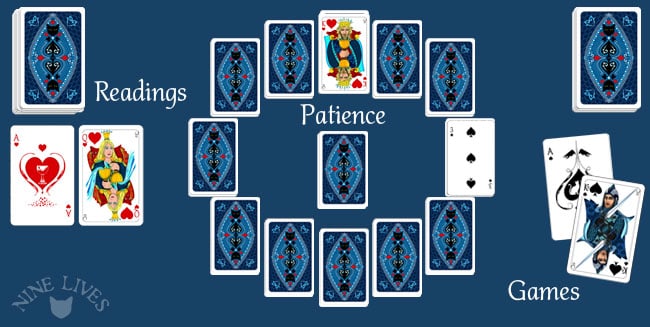 Nine Lives Illustrated Playing Cards is a deck inspired by tarot, which is why I’m going to start with a few ideas on how to read the cards. First, a brief comparison between Tarot and Playing Cards:

A Standard Deck of Playing Cards

Some read playing cards exclusively, some alternate reading playing cards and tarot cards. I enjoy playing cards for impromptu readings, quite similar to reading only the Minor Arcana in tarot, as a way of gaining fresh insight on every-day issues to do with focus, influences and goings-on in our present daily life…

This quick 3 card reading can be used to look at a situation, making you more aware of your strengths and the challenge on hand, and ways of dealing with it.

Start by shuffling the deck well, and from the top of the deck lay three cards from left to right: 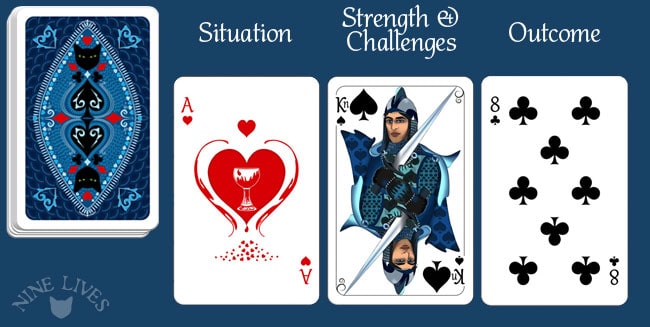 The three cards above tell a story, inviting the querent to tap into the subconscious and intuitive – to better see what, on some level, is already known …

Here we have the Ace of Hearts – The heart of the matter (no pun intended) is about love and relationships, possibly a new relationship on the horizon, or, a shift in focus, where embracing love and unity is key to the situation …

Knight of Spades – proud, action and truth driven. Bringing home that the challenge is to be both perceptive and clear minded. Nobility and truth in matters of love is a good thing, and while the Knight of Spades sometimes has a reputation of being both determined and calculated, he does have truth at the centre of everything he does. Turn the challenge into strength as you act on that which you know to be true.

8 of Clubs – talks about the discovery of ‘where to from here’ – Having sought truth and clarity from the Knight, you are ready to move forward with a heightened sense of direction.

A note about Pages, Knights and Jacks

In tarot, Pages are seen as ‘the messengers’ and Knights as ‘the doers’ … As there are no Pages in a playing card deck, the Jacks (Knights) can be seen as a combined tarot Page and Knight, allowing each reading to determine the main emphasis.

Number cards (2-10) in traditional playing cards often don’t feature the type of detailed illustrations you find in many tarot decks. Yet, if you apply your tarot knowledge to the cards (or use a handy guide) they are quite easy to read, and can even offer a fresh and unobstructed way of ‘looking at the cards’. The descriptions for Nine Lives Tarot can be found here, and below is a little guide on the basic influence of each number:

Jokers… what about them?

Not everyone who reads playing cards includes the Jokers, though they can be used to represent specific card(s) from the Major Arcana (the Fool is common, as is the World) ,  Jokers can also be used as ‘wild cards’, where the position of the card in a reading determines the significance and the meaning.

This is obviously a very brief look at reading playing cards. Keep in mind that there are many different ways; you may have come across methods that place significance on red vs black cards, or interprets the meanings in a different way. Perhaps you are a proficient card reader and would like to share your way :)

Laying patience can be a fun pass-time, even if you happen to be slightly lacking in the quality most required to see it through … A good friend recently reminded me of the old Clock Patience, which is definitely an entertaining way to puzzle, reveal and sort the cards.

How to play Clock Patience

Start by shuffling the cards (well) and deal the entire deck into 13 piles with 4 cards in each. Place the piles in a circle (to make the shape of a clock) – with one pile at each position from 1 o’clock to 12 o’clock – the last pile, 13 o’clock, goes in the centre: 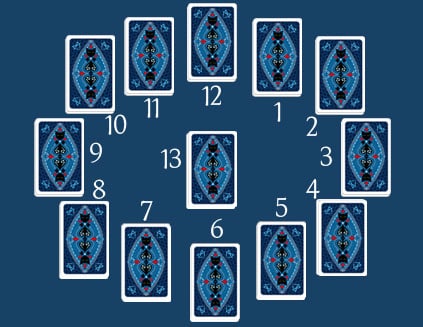 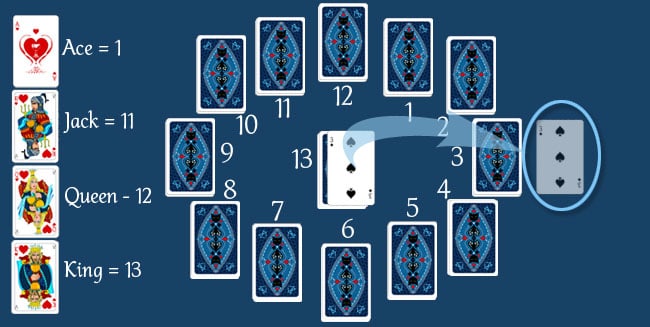 Keep repeating as many times as possible. Note that Aces, Jacks (Knights), Queens and Kings have the values: 1, 11, 12 & 13 respectively. 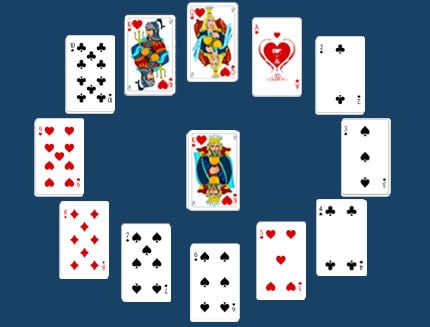 A Game or two of Cards …

Card games can provide plenty of entertainment and fun .. if you have favourite card game that you would like to share, I’d be thrilled to add it to this post :) Card games come in all shapes and sizes and have many variations and versions. Below you’ll find a few of my favourites, you may have played the same game, or a version with completely different rules. Whichever way, I hope you enjoy – and remember, matches and chocolate are as good a bet as any ;)

21 – the French cousin of Black Jack

For this game you need one deck of 52 cards, no Jokers.

21 is very similar to Black Jack – great for rattling those adding skills, along with a dose of risk. The purpose of the game is to get 21, or as close to as possible, and to win against the ‘Bank’. First you agree on who will be the Banker – this person places whatever he or she is happy to risk (coins, matches, chocolates …)  in the centre of the table, referred to as the ‘pot’. The Banker then shuffles and deals one card face-down to each player, and one card face-up to him or herself. Players don’t play each other, instead they take turns (clock-wise) at playing against the Bank.

Placing bets and playing your hand

View your first card without revealing it and place your bet before asking for the second card. Note, your bet cannot exceed what is currently in the pot. If you believe your chances of getting 21 are high, you may decide to risk more of your matches.. After your second card, you can request more cards, one at a time – as long as you don’t go above 21. Note that if you (or the banker) has 5 cards on hand (less than or equal to 21), this automatically counts as 21 or ‘peasants 21’.  If you go above 21, you have to show your cards (the bank wins). If you are satisfied with the number of cards you have, keep them face down. It is now the banker’s turn to take cards, one at a time, each one face up.

Play moves to the next player, who tries his or her luck against the Bank. When all cards except the ‘bottom’ card in the deck have been dealt, the banker re-shuffles and play continues. Normally, you decide in advance how many rounds the banker will sit, after which he or she gets to keep what is left in the pot and the next banker puts whatever he or she is happy to risk in the centre of the table.

This game is perfect for 4 players, where you use all 52 cards in the deck (no Jokers). It is possible to play with more or less than 4 players, but for the sake of simplicity I’m sticking to the 4 player rules :)

Begin by shuffling and deal 13 cards to each player. Before the first ‘trick’ each player discards 3 of their cards, passing them to the player on their left: 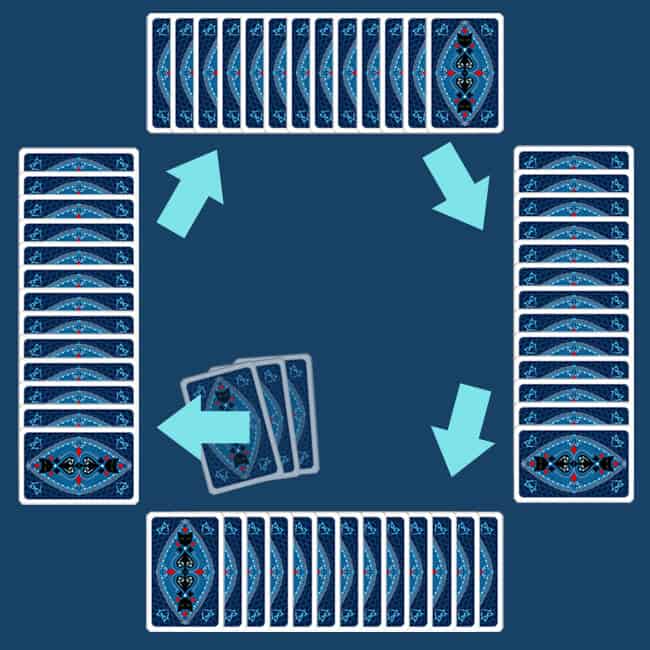 The player who has 2 of Clubs begins the first trick by laying this card in the centre. The next player (on their left) must follow suit i.e. play a card of the same suit. If you don’t have a card matching the leading suit, you can ‘discard’ a card from one of the other suits … The player who puts down the highest card in the leading suit wins the trick along with any penalty cards. 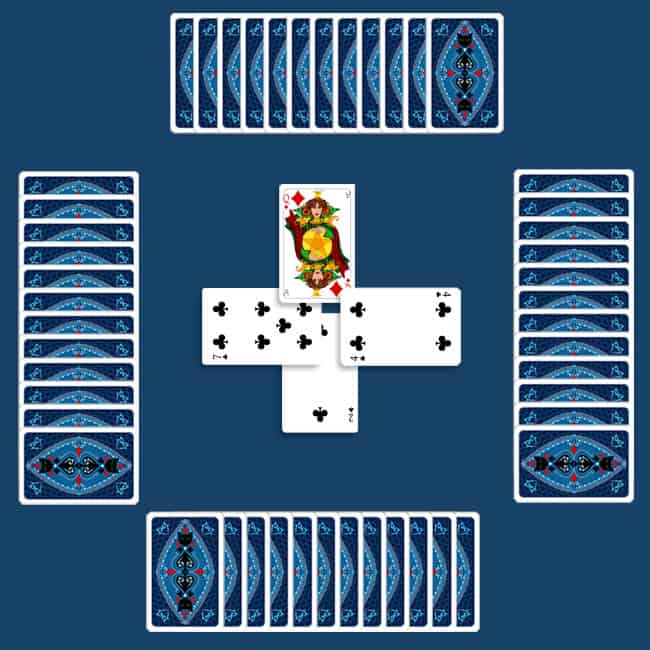 Summing up how to play hearts with 4 players

This hilarious game is fast paced and bound to have you in fits of laughter. Our friends visiting from overseas showed us the ropes and it has been a household favourite ever since. The more, the merrier is absolutely true for this one!

Begin by shuffling and dealing 4 cards, face-down, to each player: 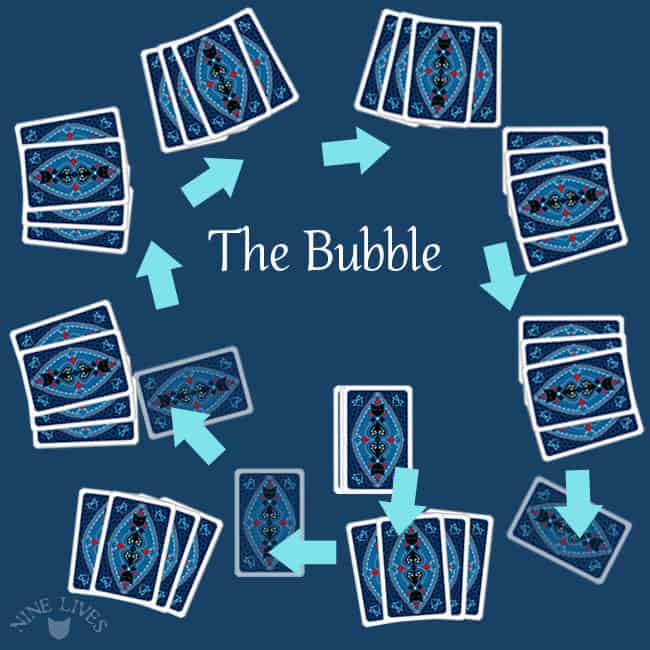 Everyone picks up their cards. The purpose of the game is to get ‘four of a kind’ through discarding and receiving cards in a clock-wise fashion.

The dealer begins the game by taking the top card from the deck pile, and depending on the card, the dealer can discard either the new card or one from the hand to the left, for the next player to pick up. Next player makes a quick decision on whether to discard the received card or throw one from the hand (again to the left). Dealer quickly picks up another card from the deck pile and selects which card to pass on … In no time, all players are moving cards to the left in a table-slapping pace trying to get four of a kind on hand.

The last player (the one on the dealer’s right) places all discarded cards in a ‘spare’ pile next to the dealer. Once the deck pile is empty, the dealer takes cards from the spare pile and keeps the play moving.

Four of a Kind

When a player gets four of a kind on hand, they have technically won the game… However, instead of announcing their feat, they blow their cheeks up like a ‘bubble’ and continue moving cards from right to left (not their winning hand of course) as if nothing had happened. Below, the King of Hearts is doing his best to show you what I mean … it’s pretty straight forward ;) 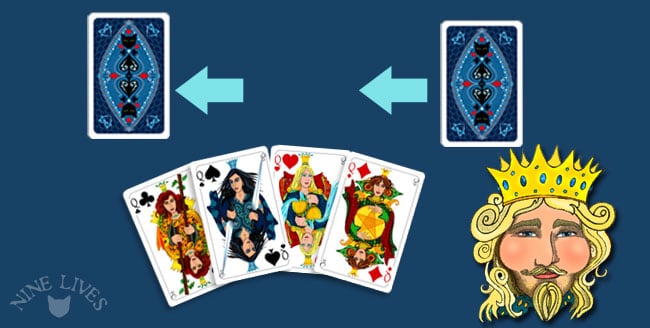 As soon as a player notices someone doing ‘the bubble’, they too, blow their cheeks up. The last player to notice that everyone else at the table has taken on a chipmunk look, loses the game. Because of the fast pace it can be easy to miss when someone other than you gets that elusive fourth card to make the winning hand …

I hope you find plenty of enjoyment with the games and ideas in this post, and if you have some favourites you would like to share, I’d love to hear!

2 thoughts on “Ideas for Reading, Playing and and Enjoying Cards”